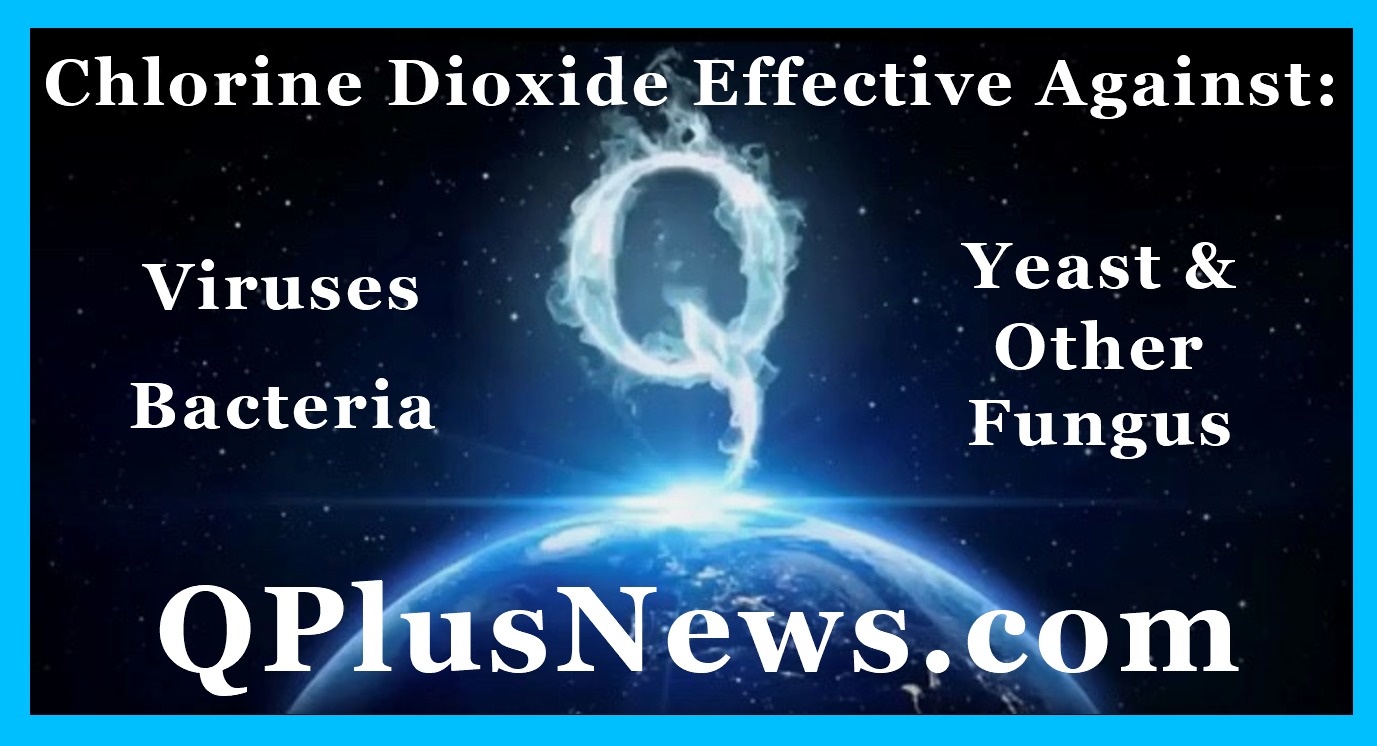 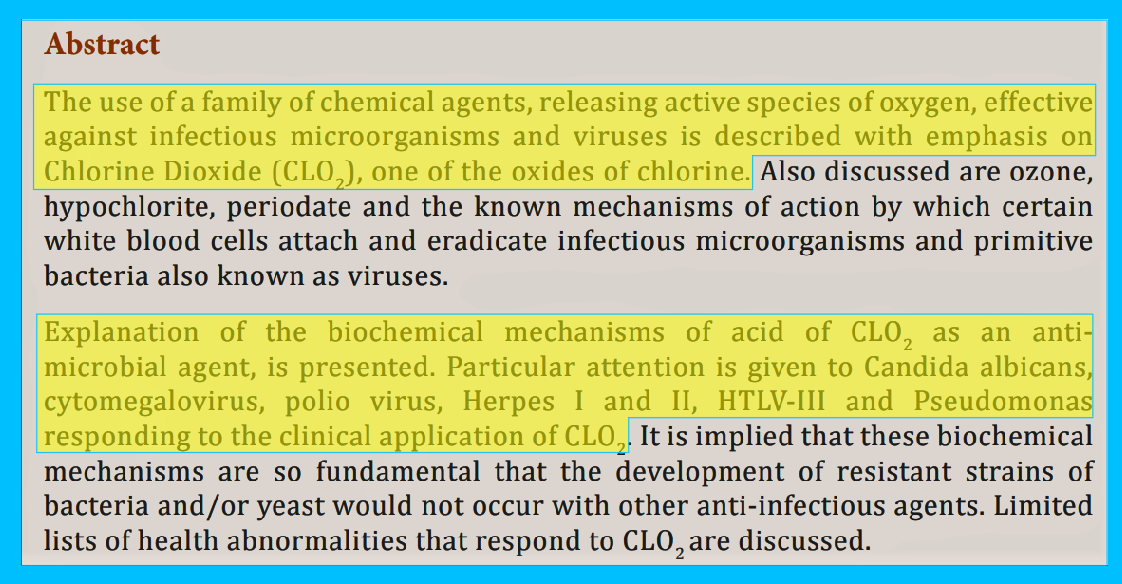 “The use of a family of chemical agents, releasing active species of oxygen, effective against infectious microorganisms and viruses is described with emphasis on Chlorine Dioxide (CLO2), one of the oxides of chlorine.”

“Explanation of the biochemical mechanisms of acid of CLO2 as an antimicrobial agent, is presented. Particular attention is given to Candida albicans, cytomegalovirus, polio virus, Herpes I and II, HTLV-III and Pseudomonas responding to the clinical application of CLO2.” 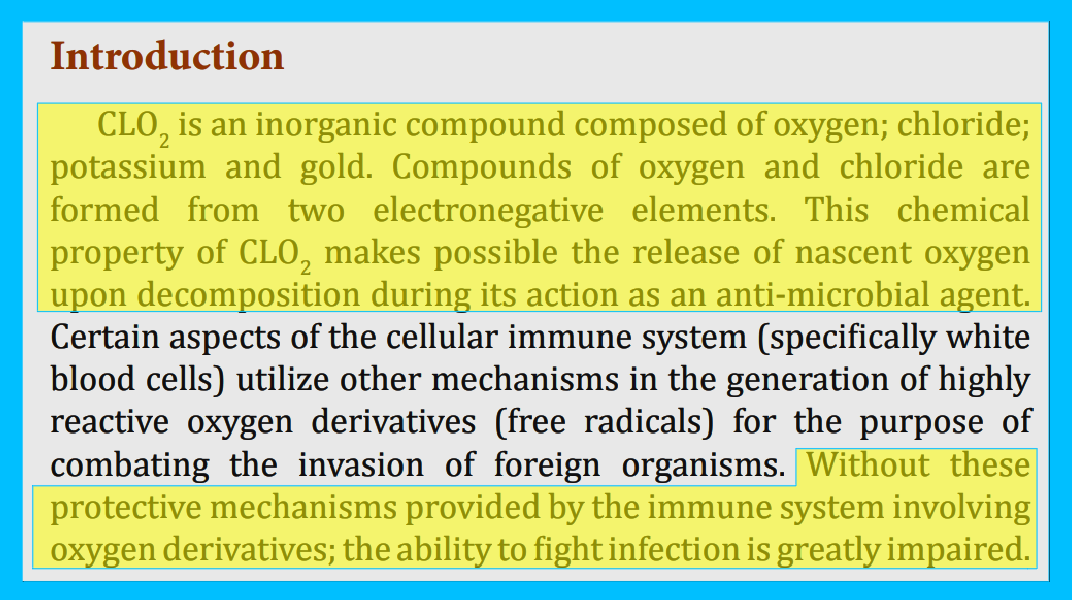 “CLO2 is an inorganic compound composed of oxygen; chloride; potassium and gold. Compounds of oxygen and chloride are formed from two electronegative elements. This chemical property of CLO2 makes possible the release of nascent oxygen upon decomposition during its action as an anti-microbial agent.”

“Without these protective mechanisms provided by the immune system involving oxygen derivatives; the ability to fight infection is greatly impaired.”

“The release of nascent oxygen from chlorine dioxide CLO2 in an acidic environment…Although the replication of the protein coat may continue; the formation of a complete functional virus has been blocked by CLO2 oxidation.”

“Because of their low tolerance for nascent oxygen and the acidic medium in which they thrive (from the liberation of organic acids); fungi in the mycelial form are sensitive to the destructive action of CLO2.”.

“CLO2 is essentially activated only by viruses; acidic bacteria and fungi.”

“A germicidal solution has been developed containing CLO2 at an acid PH (lactic acid). The solution gave complete kill of Staphylococcus aureus; Pseudomonas and Candida albicans spores within 10 minutes.”

“The bacterial virus £2 was rapidly inactivated with CLO2 at pH 5.9 only GMP (guanosine monophosphate) reacted while the amino acids cystine; tryptophan and tyrosine reacted rapidly.”

“CLO2 applied to polio virus separated the RNA from the protein coat (capsid). CLO2 reacted with the capsid protein and prevented
the adsorption; penetration and normal un-coating of the virus. It also reacted with the viral RNA and impaired the ability of the nucleic acid to act as a template for replication.” 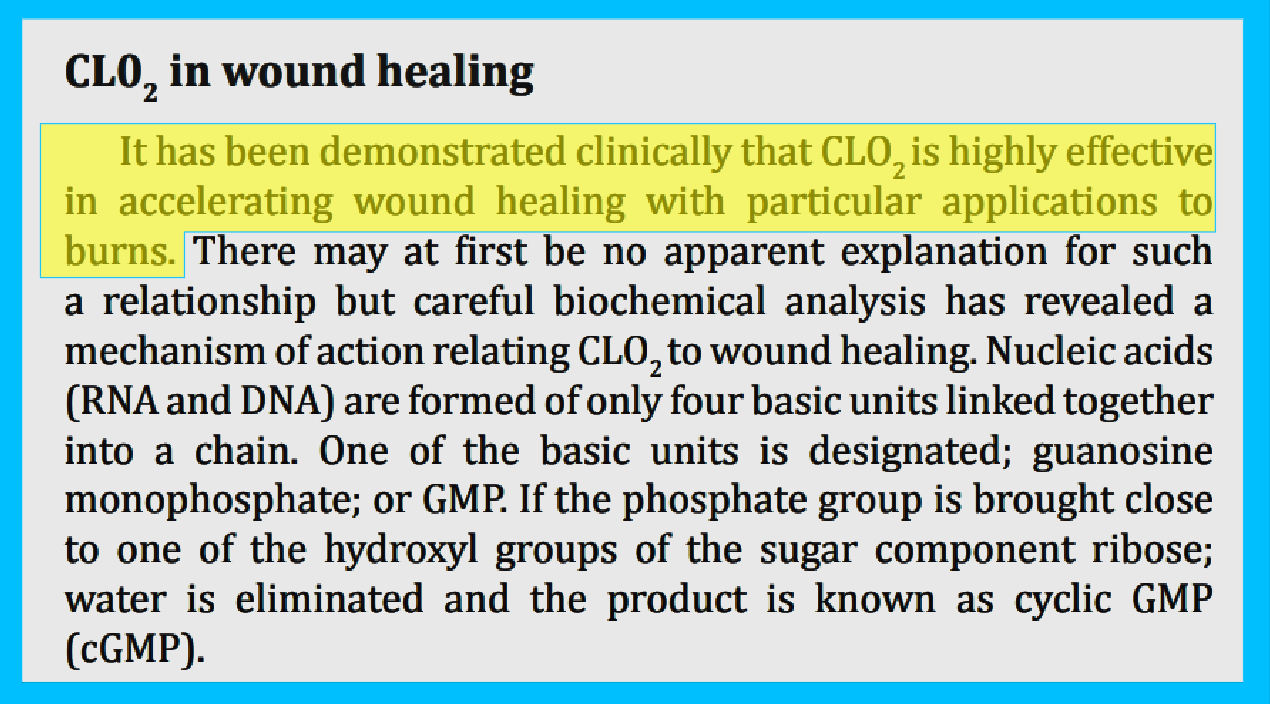 “It has been demonstrated clinically that CLO2 is highly effective in accelerating wound healing with particular applications to burns.” 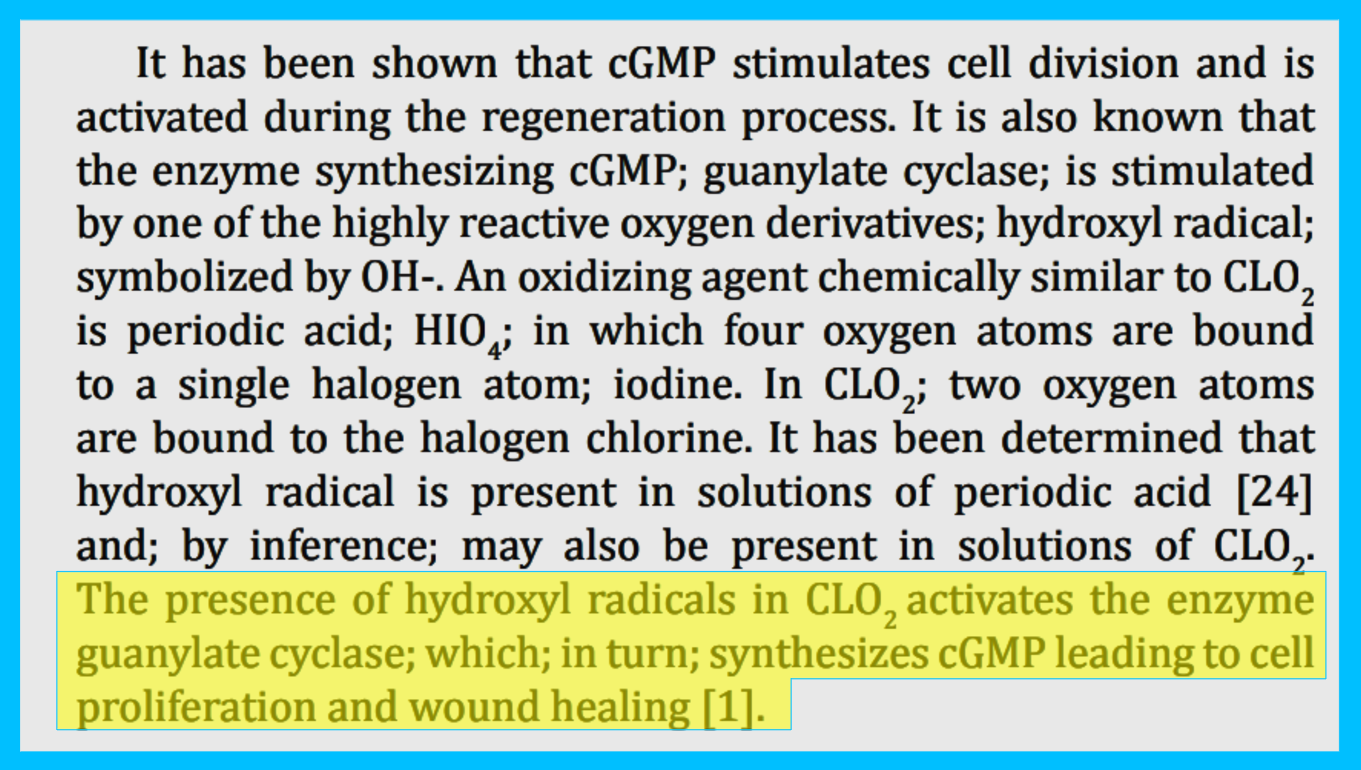 “The presence of hydroxyl radicals in CLO2 activates the enzyme guanylate cyclase; which; in turn; synthesizes cGMP leading to cell proliferation and wound healing.” 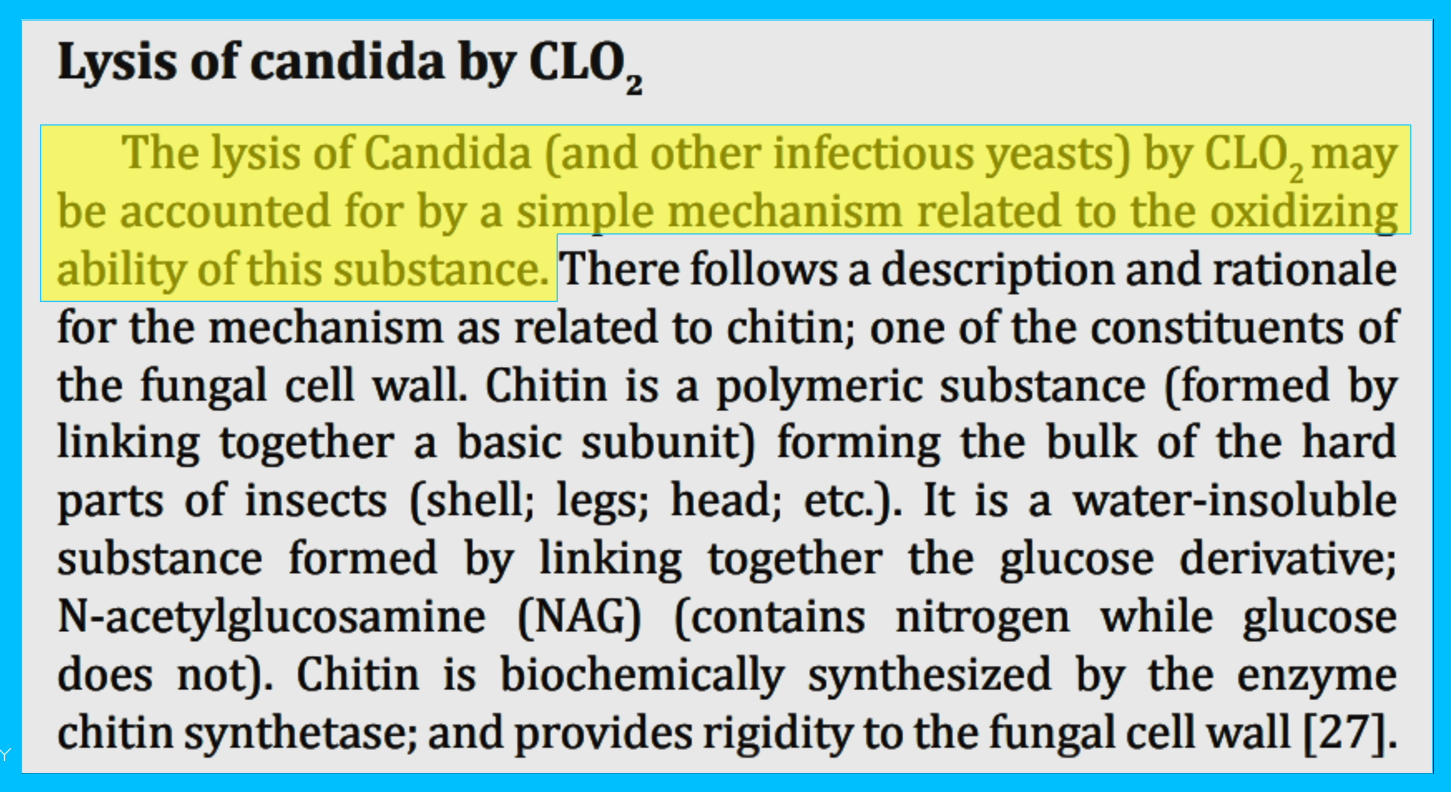 “The lysis of Candida (and other infectious yeasts) by CLO2 may be accounted for by a simple mechanism related to the oxidizing
ability of this substance.” 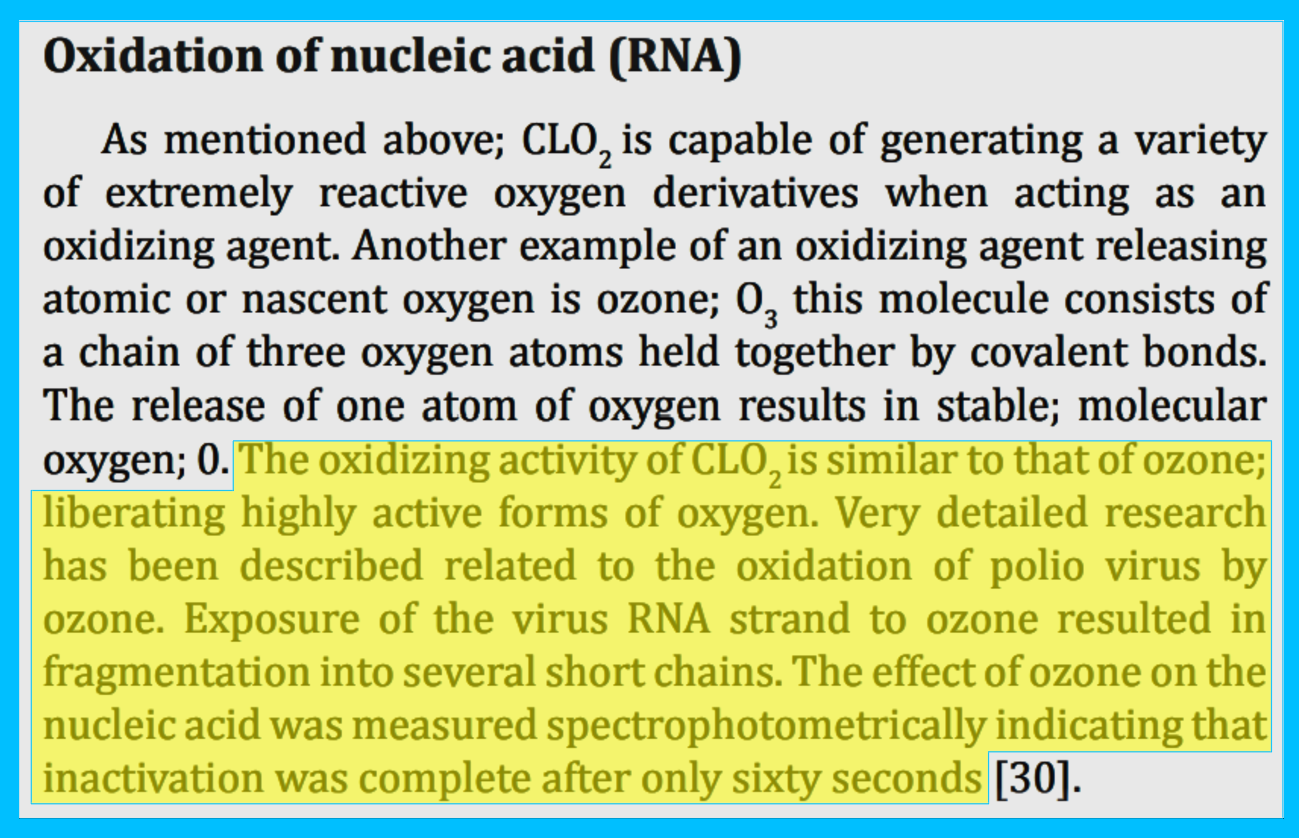 “The oxidizing activity of CLO2 is similar to that of ozone; liberating highly active forms of oxygen. Very detailed research has been described related to the oxidation of polio virus by ozone. Exposure of the virus RNA strand to ozone resulted in fragmentation into several short chains. The effect of ozone on the nucleic acid was measured spectrophotometrically indicating that inactivation was complete after only sixty seconds.”

Ongoing research at the Innerlight Biological Research Foundation has been investigating the clinical usage of CLO2 for the following applications for over twenty-five years: 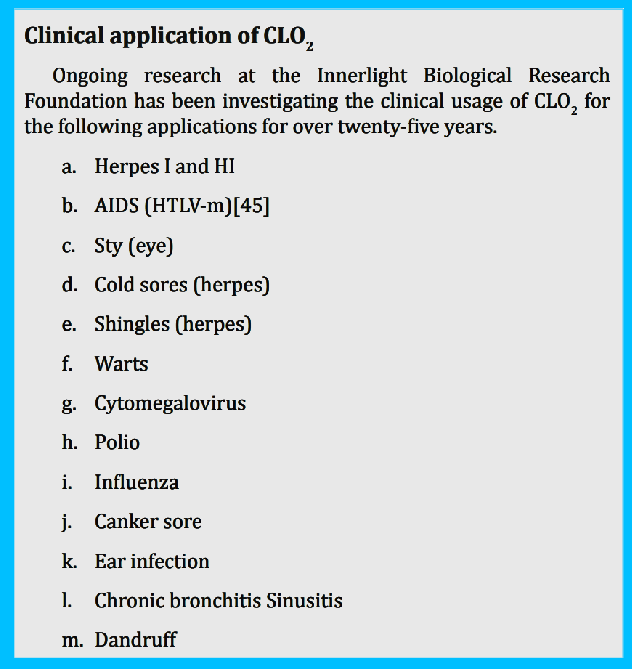 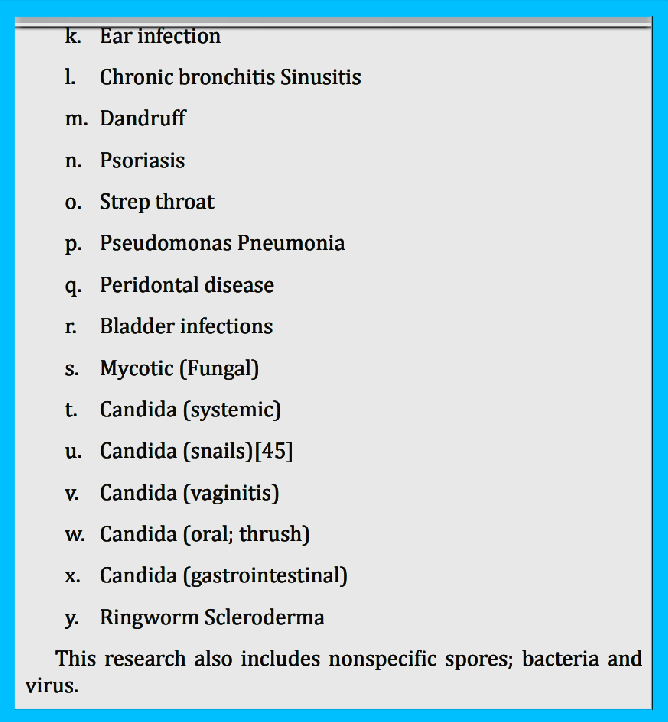 8 thoughts on “Chlorine Dioxide Effective Against Viruses, Bacteria and Fungus”