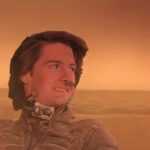 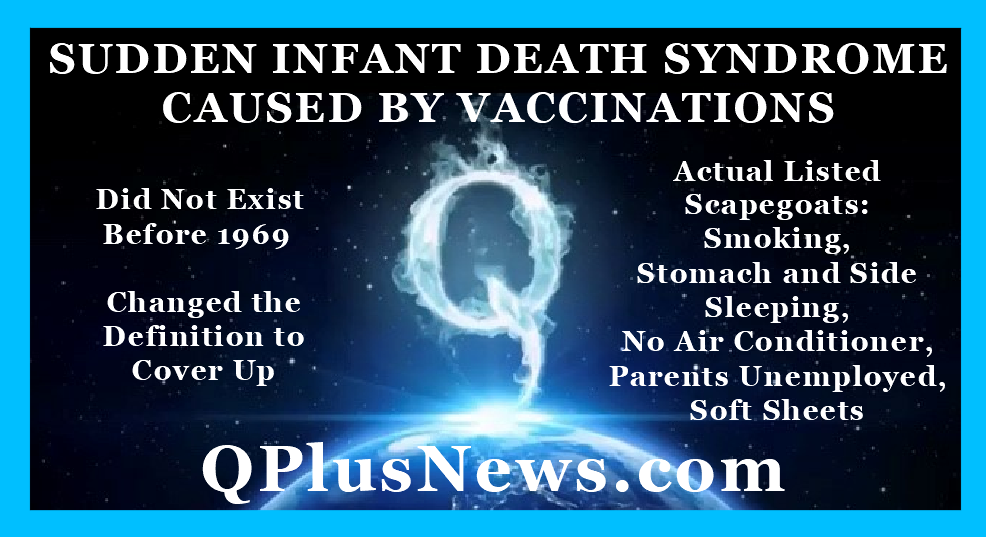 And the best way to prevent SIDS according to the Medical Establishment: Vaccinations and pacifiers.

The article should end here. Any right minded person in the world would not require any more evidence than what is listed above. But because there are so many brainwashed sheep that still need to be redpilled (the time for taking orally has passed, suppositories are now required) we will go further with the scientific evidence.

An Investigation of Infant Deaths Following Initial Hepatitis B Vaccination Based on the Vaccines Adverse Event Reporting System (VAERS), 1992-2002

“Conclusion: A systematic review of neonatal SIDS and other unexpected infant deaths following the initial dose of hepatitis B vaccination should be undertaken at the international level.” 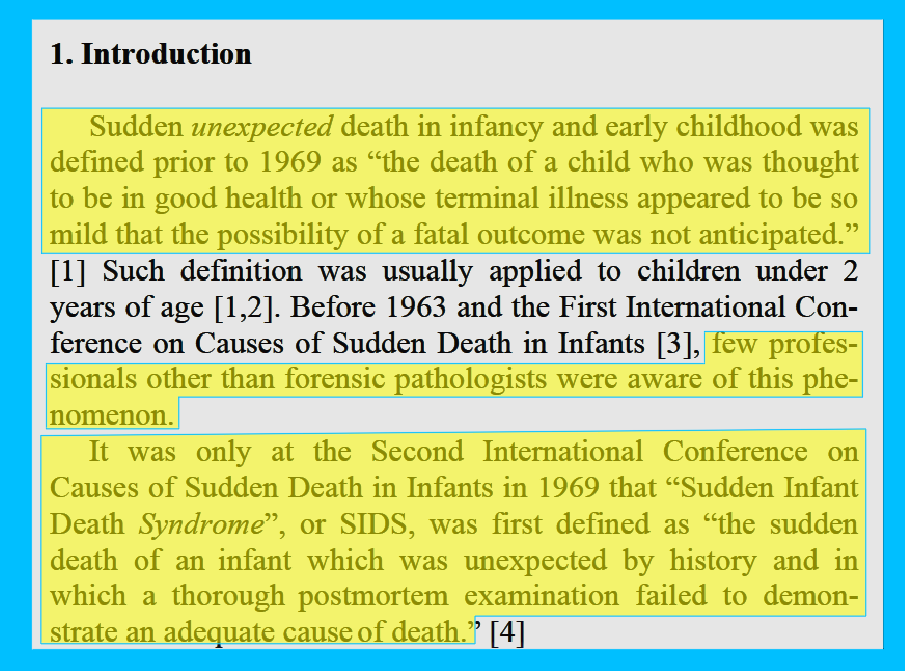 “Sudden unexpected death in infancy and early childhood was defined prior to 1969 as:

“the death of a child who was thought to be in good health or whose terminal illness appeared to be so mild that the possibility of a fatal outcome was not anticipated.” (So children who were sick)

“Before 1963, few professionals other than forensic pathologists were aware of this phenomenon.” So prior to 1963, SIDS was unheard of among doctors and only known by those who investigate wrongful deaths. Nothing shady about that right?

“In 1969 that “Sudden Infant Death Syndrome”, or SIDS, was first defined as “the sudden death of an infant which was unexpected by history and in which a thorough postmortem examination failed to demonstrate an adequate cause of death.”

So now the health history of the baby has nothing to do with it. It’s the ambiguous phrase “unexpected by history” and an autopsy report. 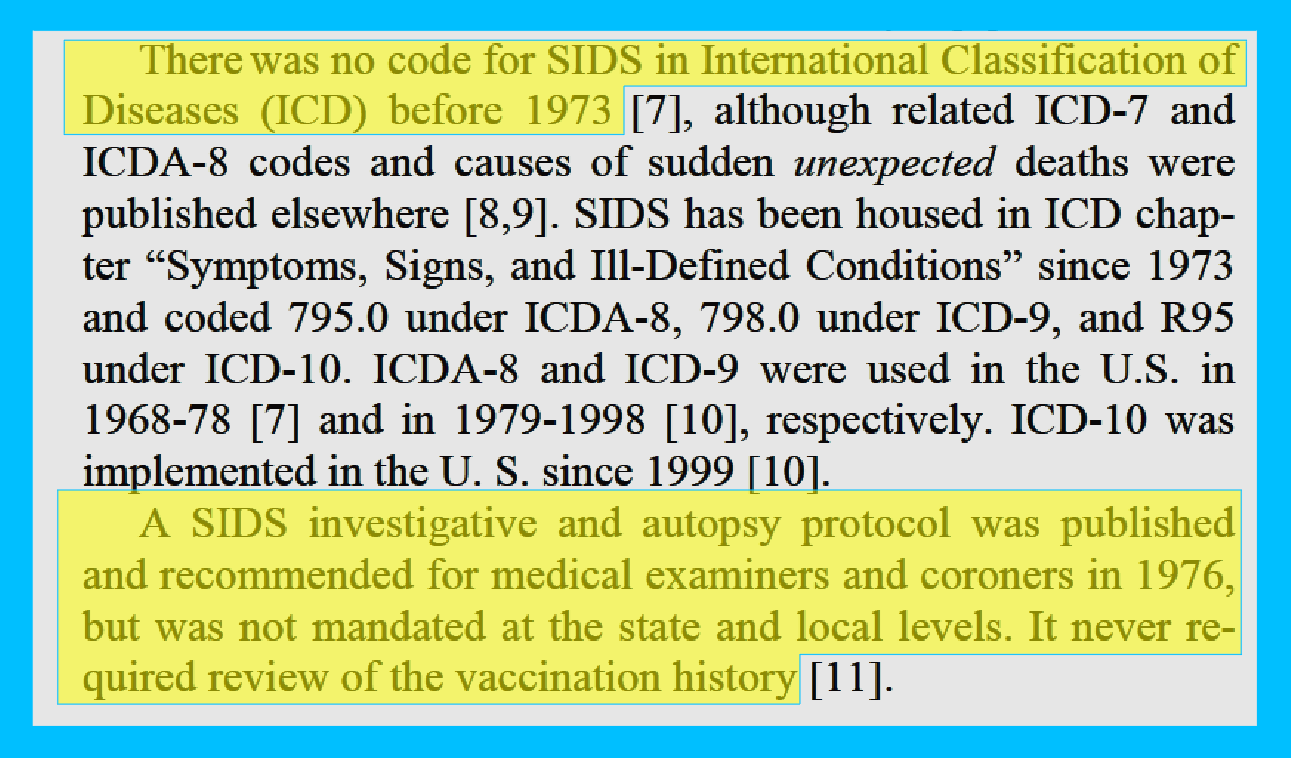 “A SIDS investigative and autopsy protocol was published and recommended for medical examiners and coroners in 1976, but was not mandated at the state and local levels. It never required review of the vaccination history.”

“It never required review of the vaccination history.” 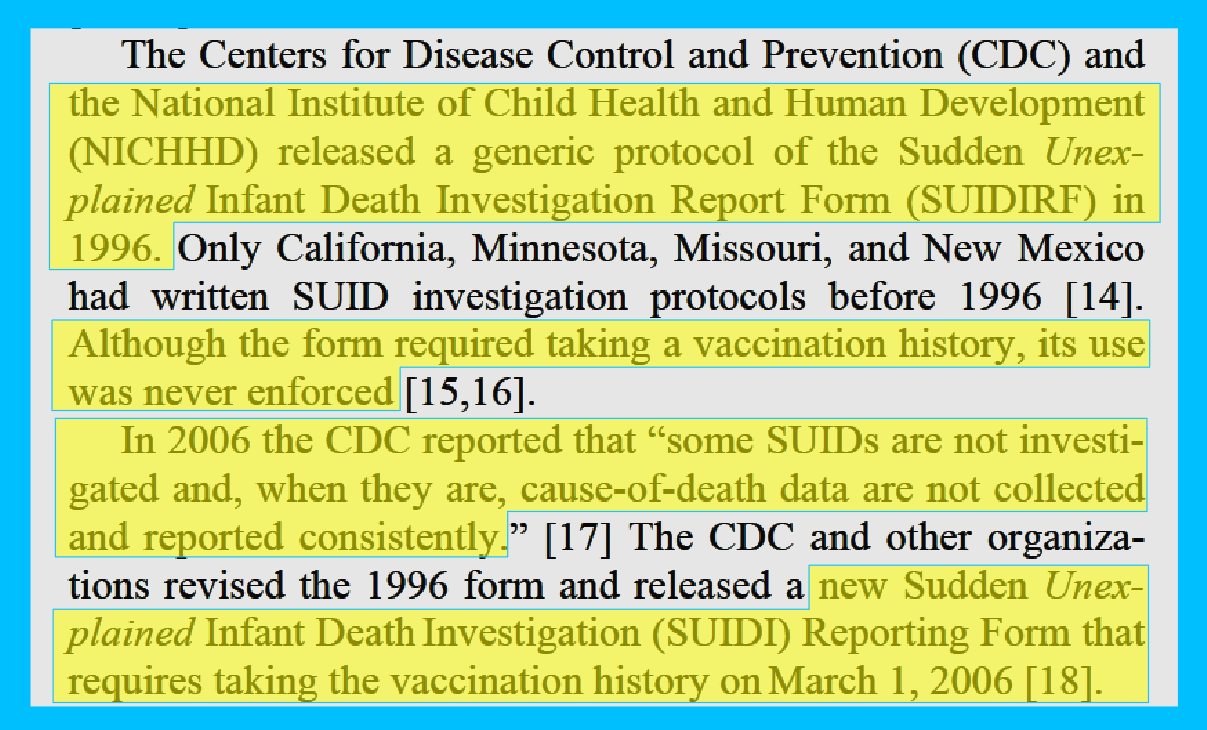 “Although the form required taking a vaccination history, its use was never enforced.”

“In 2006 the CDC reported that “some SUIDs are not investigated and, when they are, cause-of-death data are not collected and reported consistently.”

Read that again: “some SUIDs are not investigated and, when they are, cause-of-death data are not collected and reported consistently.” 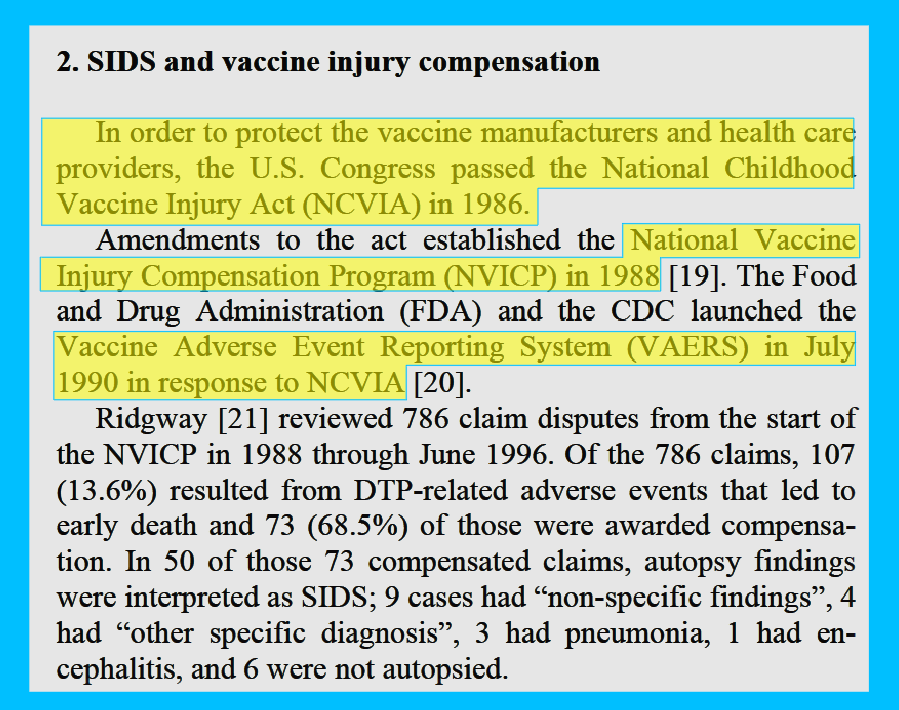 And now the CYA part comes into play. “In order to protect the vaccine manufacturers and health care providers, the U.S. Congress passed the National Childhood Vaccine Injury Act (NCVIA) in 1986.” 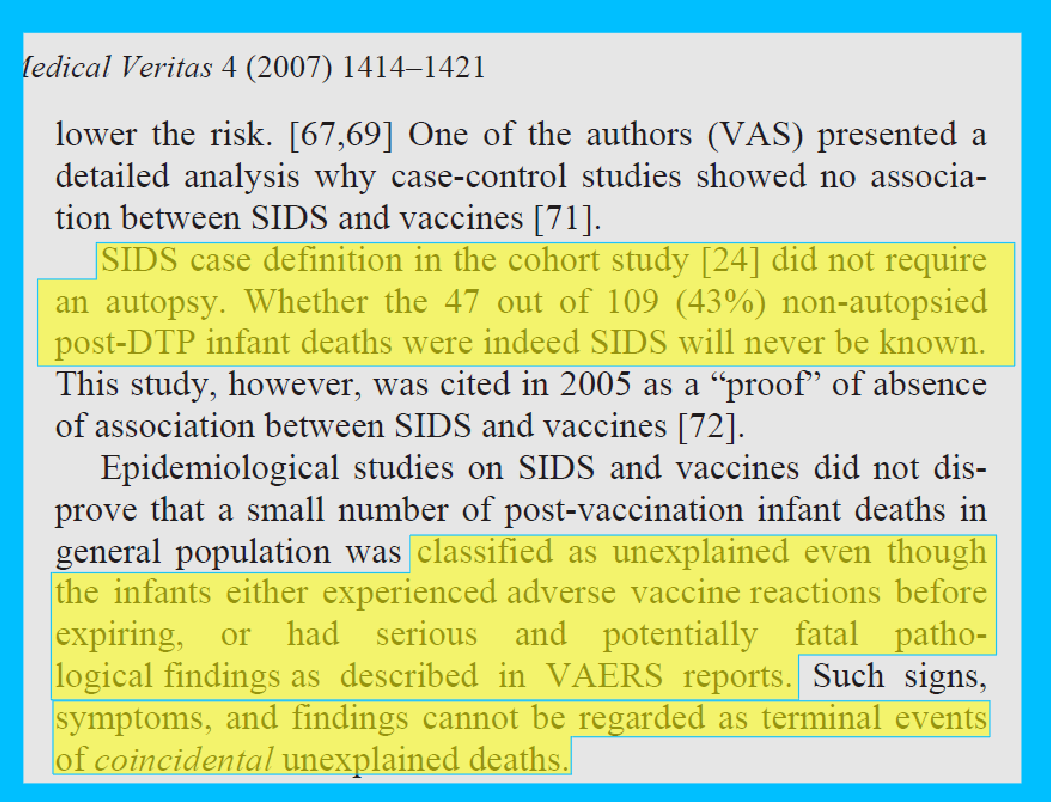 “SIDS case definition in the cohort study [24] did not require an autopsy. Whether the 47 out of 109 (43%) non-autopsied post-DTP infant deaths were indeed SIDS will never be known.”

“Classified as unexplained even though the infants either experienced adverse vaccine reactions before expiring, or had serious and potentially fatal pathological findings as described in VAERS reports.”

So even after the babies had adverse reactions to the vaccines and potentially fatal pathological findings documented in the report, the deaths were still classified as unexplained. I’m not even shocked anymore.

“Such signs, symptoms, and findings cannot be regarded as terminal events of coincidental unexplained deaths.” 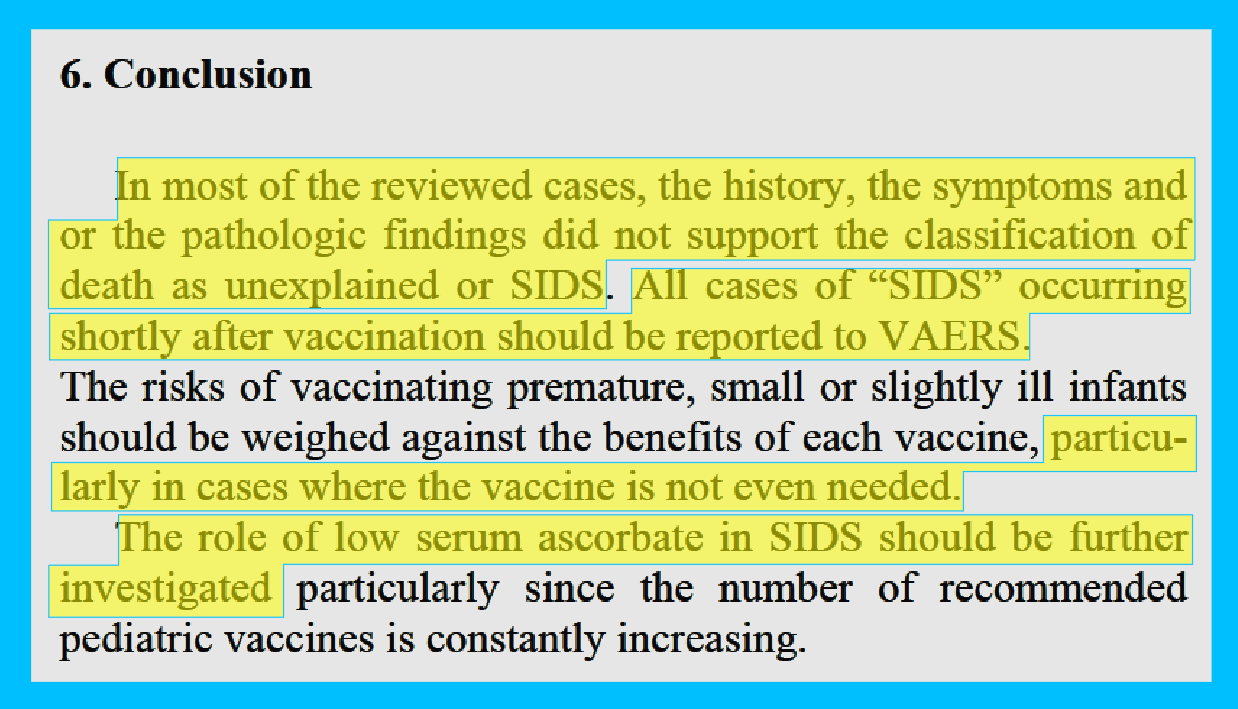 “In most of the reviewed cases, the history, the symptoms and or the pathologic findings did not support the classification of death as unexplained or SIDS.

“All cases of SIDS occurring shortly after vaccination should be reported to VAERS.”

“Particularly in cases where the vaccine is not even needed.”

“The role of low serum ascorbate in SIDS should be further investigated particularly since the number of recommended pediatric vaccines is constantly increasing.”

I will not dignify the lying propaganda article that outlined the “Risk Factors” listed above by quoting or referencing anything else. I will leave the link for you to look if you what.