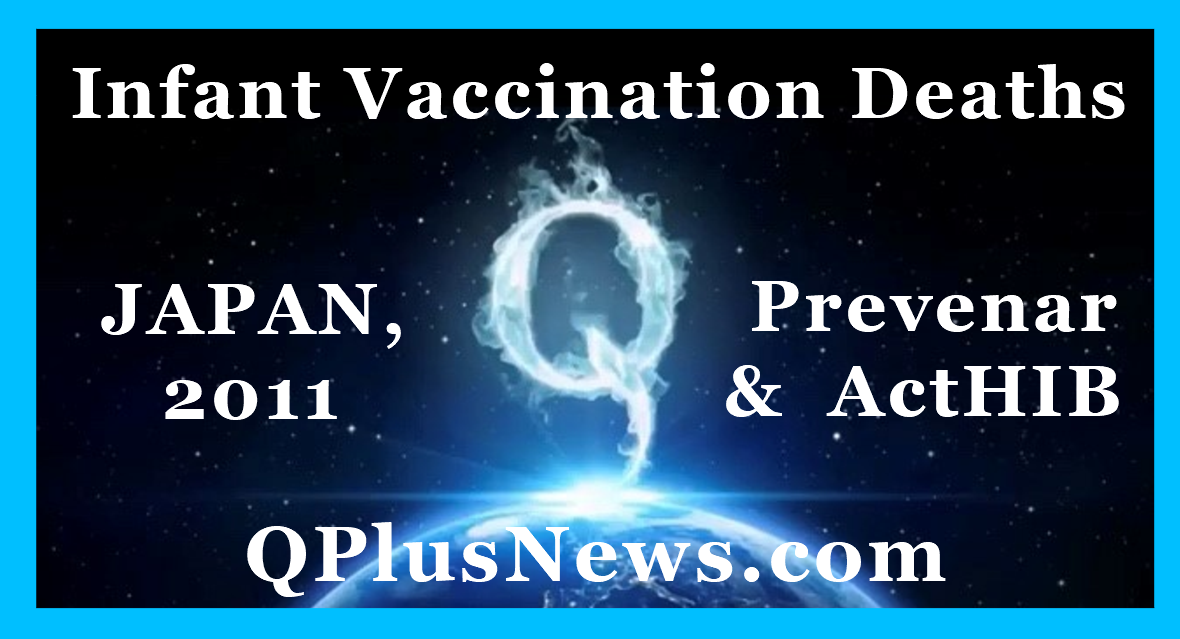 “Japan has suspended vaccines made by Pfizer and Sanofi-Aventis while regulators investigate the deaths of four children last week.”

‘The infants had been vaccinated with several childhood shots simultaneously, including Pfizer’s meningitis and pneumonia preventive Prevenar and Sanofi’s Hemophilius influenza vaccine ActHIB.”

These babies were injected with five vaccinations simultaneously. I am having trouble wrapping my brain around the insanity of this.

“No causal relationship has been established between immunization and these fatalities, but an investigation is underway.”

Don’t worry crazy anti-vaxxers, an investigation is under way so I am sure they will get to the bottom of it, even though the company responsible is keeping quiet.

“Sanofi’s ActHIB had been administered to three of the four children, while Prevenar was given to all four.”

“This probe follows last year’s investigation of three deaths in the Netherlands, Reuters notes. Health authorities there found no link between Prevenar and the deaths.”

No, this doesn’t sound like a setup for what the results of the  “investigation” will be. 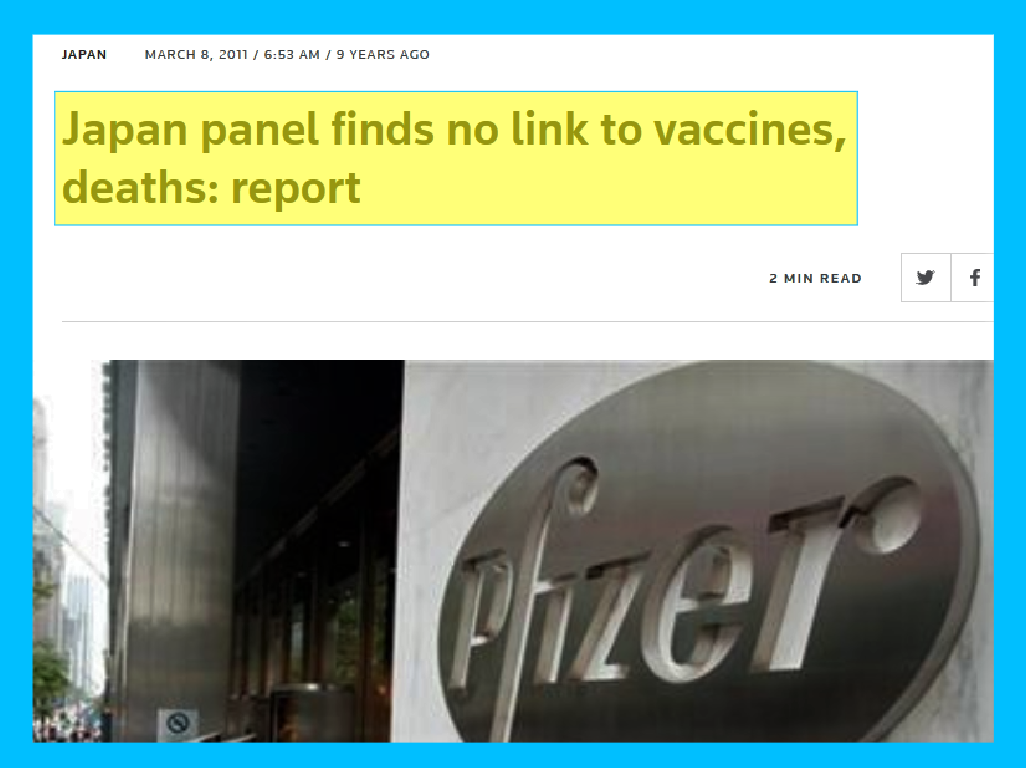 “A panel of experts at Japan’s health ministry found no direct link between vaccines made by Pfizer Inc and Sanofi-Aventis SA and the deaths of children, but said further checks were needed.”

What a surprise, the “investigation” found no links. Crazy anti-vaxxers, you can stop worrying, it was all just a conspiracy theory.

But how can you determine there were no direct links when you still haven’t finished the investigation? If further checks are needed, then those might reveal some evidence there was a link between the two.”

You are just a crazy anti-vaxxer, take off your tin foil hat.

“The ministry halted the use of Pfizer’s Prevenar and Sanofi’s ActHIB vaccines in response to the deaths of four children shortly after receiving the vaccines.”

“In February last year health authorities in the Netherlands said no relation was found between Prevenar and the deaths of three infants who had received the vaccine.”

Just like the article above, they had to throw this propaganda piece to solidify the lie.

“Three of the children that died in Japan were administered Prevenar together with ActHIB.”

“In addition, three of the children also received a mixed vaccine against diphtheria, whooping cough and tetanus on the same day they received the other vaccines. 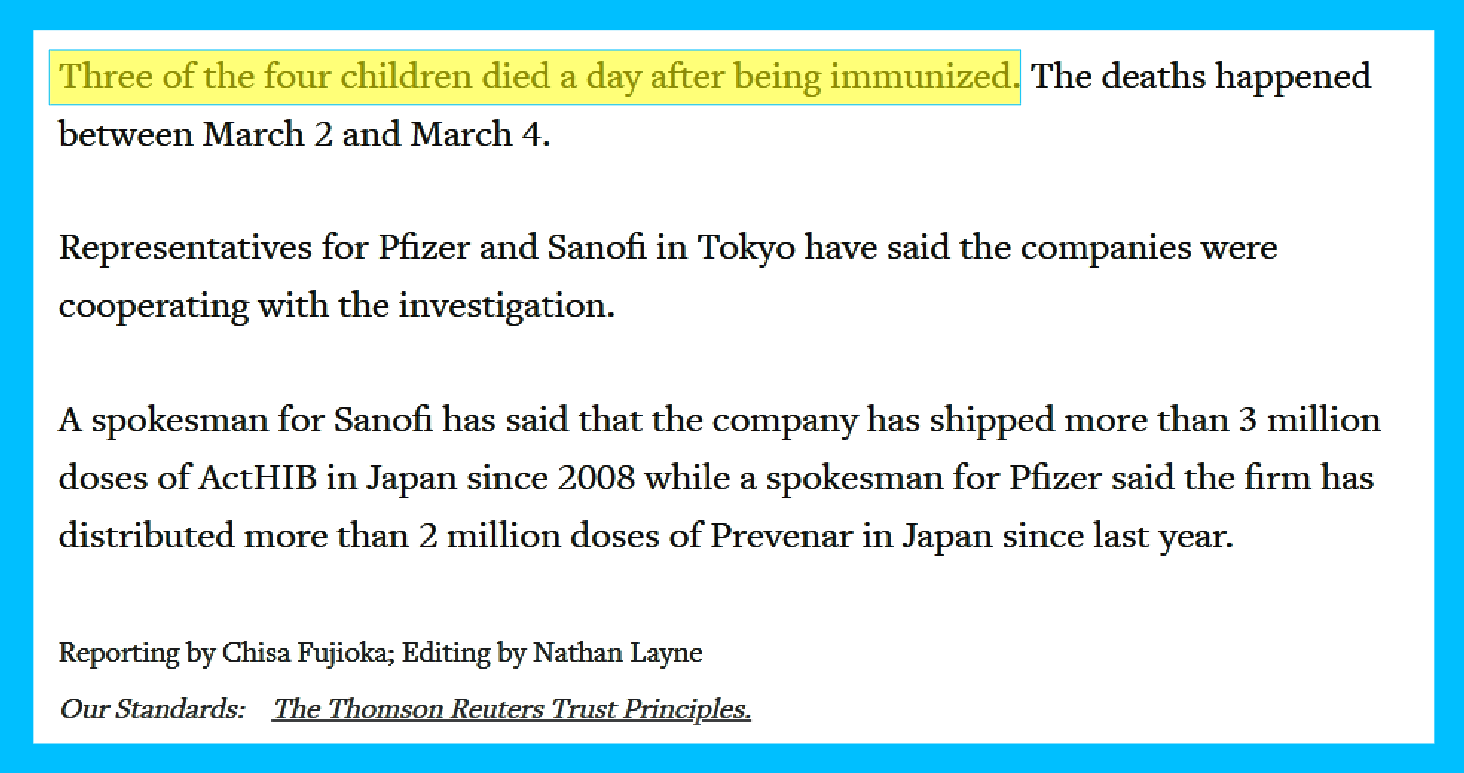 “Three of the four children died a day after being immunized.”  Notice how they put this at the very end of the article. Five vaccines and all three died the next. I guess they are right, there is no direct link here.

This insanity needs to stop. Stop getting vaccinations! They are not meant to kill upon injection, that is considered collateral damage. It actually hurts the companies administering the shots because they don’t want you dead now, they want you sick later in life.

Why do you think there is such a coordinated effort to immunize ALL children, even those that are homeschooled or take classes online? We all know the argument that if your child is vaccinated, then why is my unvaccinated child a danger?

They need to vaccinate everyone so when they are adults there can be no comparative analysis between their current diseases and the  vaccinations they received as children, as compared to those that did not receive any.

Anti-vaxxers unite! They can pick us off individually, but not if we stand together.