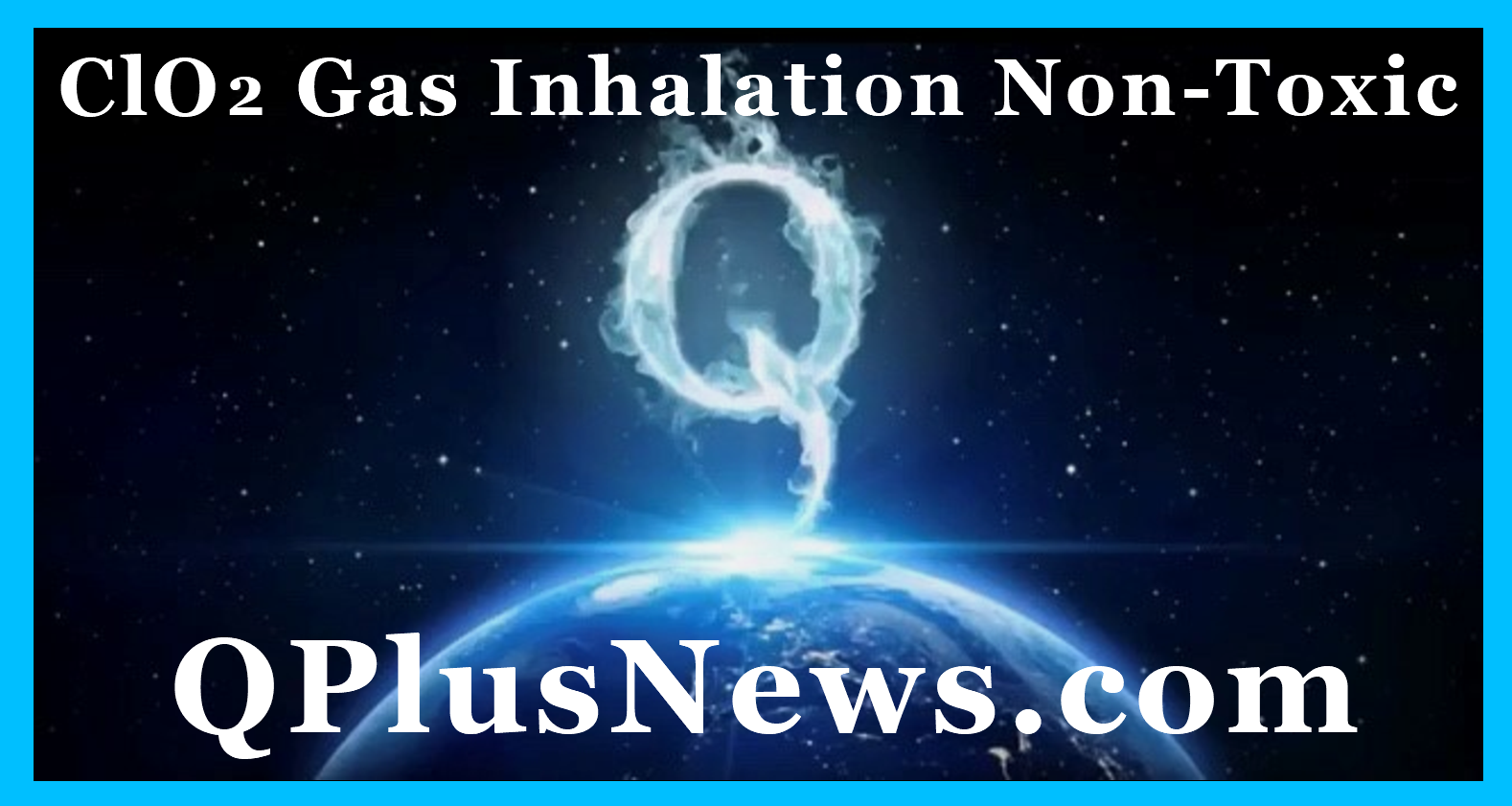 “Therefore, long-term, low concentration CD gas inhalation toxicity was studied in rats as a six-month continuous whole-body exposure
followed by a two-week recovery period, so as to prove that the CD gas exposed up to 0.1 ppm (volume ratio) is judged as safe on the basis of a battery of toxicological examinations.”

“CD gas at 0.05 ppm or 0.1 ppm for 24 hours/day and 7 days/week was exposed to rats for 6 months under an unrestrained condition with free access to chow and water in a chamber so as to simulate the ordinary lifestyle in human. The control animals were exposed to air only”

“No significant difference was observed in body weight gain, food and water consumption’s, and relative organ weight. In biochemistry and hematology examinations, changes did not appear to be related to CD gas toxicity.

“In necropsy and histopathology, no CD gas-related toxicity was observed even in expected target respiratory organs.”

“CD gas up to 0.1 ppm, exceeding the level effective against microbes, exposed to whole body in rats continuously for six months was not toxic, under a condition simulating the conventional lifestyle in human.” 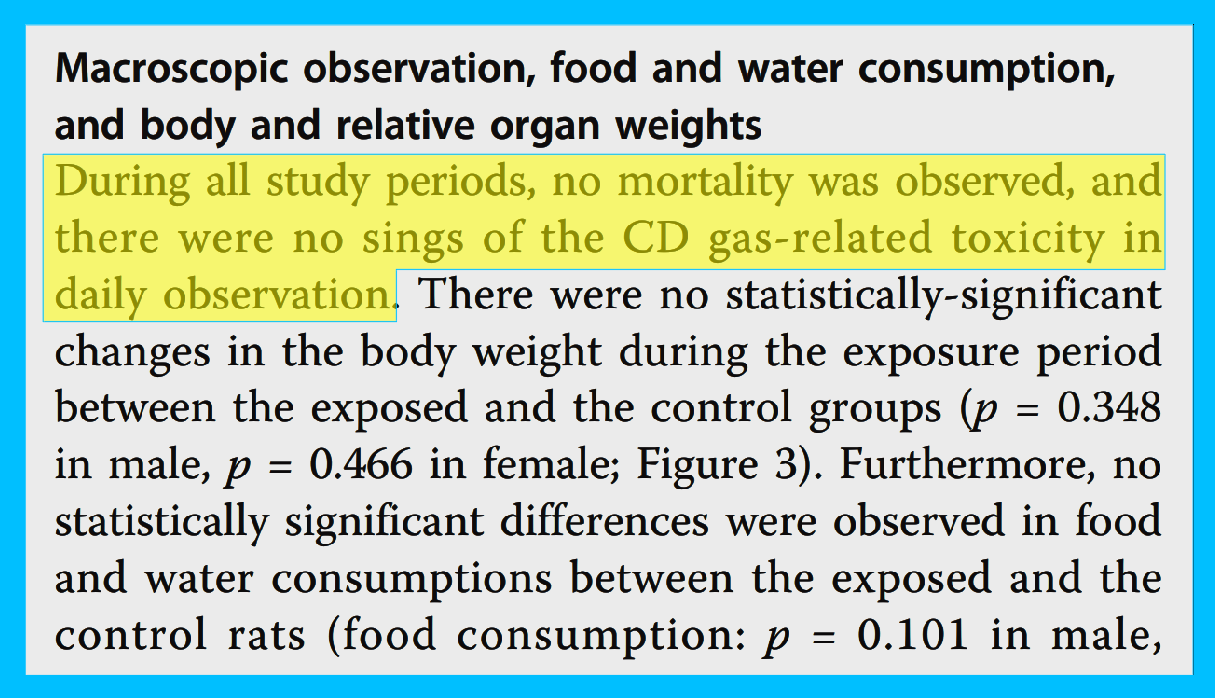 “During all study periods, no mortality was observed, and there were no sings of the CD gas-related toxicity in daily observation.”

“No signs of the toxicity were observed in all organs on macroscopic necropsy examination.”

“However, since our primary objective in this study was to reveal that the CD gas up to 0.1 ppm (the concentration that exceeds the effective level against microbes) was safe, even after the longest period of exposure time.”

“Our study was still valuable in terms of confirming:

“That the CD gas concentration that was effective against microbes was not toxic.” 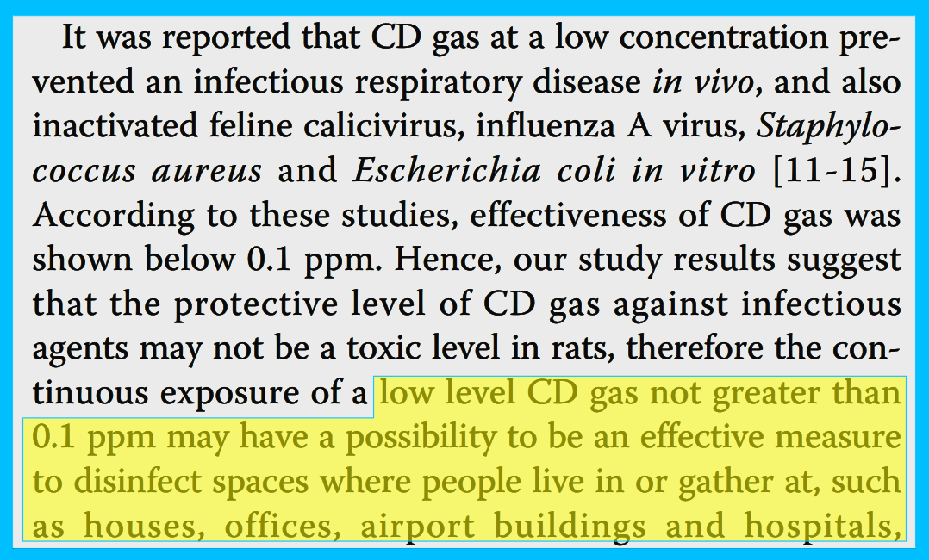 “Also, additional toxicity studies, such as a developmental toxicity study and a reproduction toxicity study, will be necessary to warrant the safety of continuous exposure of low-level CD gas in public space for the purpose of controlling infection from various, airborne
and surface-residing microorganisms.”

So once again we have a cheap, effective and non-toxic disease prevention that is available and not being used. We are being told that family members have to die by themselves in hospitals and nursing homes in order to prevent the spread or additional infections.

However, safe levels of Chlorine Dioxide could be pumped into these facilities eliminating both concerns. Had enough yet?